Peace, Justice and the Persistence of Reason

The city of The Hague has a special relationship with Peace and Justice. This booklet links up many centuries of legal developments in The Hague at national and international level with what can still be seen on our city’s streets today. We have chosen a continuous storyline in which legal ‘fun facts’ and developments are clearly elucidated without any unnecessary legalese, commencing at the time when torture was still the norm, and ending with the fight against cybercrime.

The book also devotes a lot of attention to real flesh-and-blood people who had considerable influence on the developments discussed, not only because they deserve such attention, but also to underline the fact that it pays to think ahead, then and now.

The numerous photos, drawings and cartoons serve to illustrate the story, although they also tell their own story of fortitude and moving with the times.

Willem van Genugten is emeritus professor of International Law at Tilburg University.
Judith van Hoogdalem is advisor at the Department for the Preservation of Historic Buildings at the Municipality of The Hague. 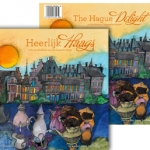